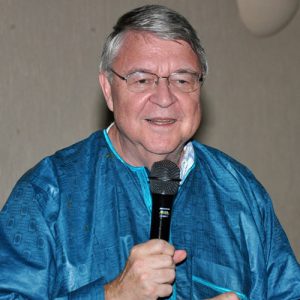 Ed’s vision took Street Law international in 1985, first to South Africa, establishing an enduring partnership with his lifelong friend, David McQuoid-Mason, the then Dean of the University of Natal Law School. Afterwards, he led programs in Latin America, East and West Africa, Eastern Europe, Russia and the Middle East. Ed was a great advocate of social justice in the human rights and democracy education programs that were developed in South Africa and the University of KwaZulu-Natal (then the University of Natal) awarded him an Honorary Doctorate of Laws for his world-wide contribution to social justice and legal education.

The University of KwaZulu-Natal will again honour Ed in 2016, by holding the Ed O’Brien International Street Law and Legal Literacy Best Practices Conference in Durban, preceded by Ed’s favourite past-time in South Africa – visiting the Hluhluwe-Imfolozi Game Reserve. We hope that many of Ed’s clinical law friends, colleagues and admirers will attend.